Most people are probably aware that Hostelling Scotland (previously the Scottish Youth Hostel Association) is a charity that provides affordable accommodation in many scenic locations throughout Scotland. Much of that accommodation is in the form of shared dormitories, rooms filled with bunk beds where weary travellers can rest and socialise. For many years these dorms have been single-sex where guests are allocated a bed based on whether they are male or female.

What most people are probably not aware of however, is that this is no longer the case.

There’s no reason why they should be aware, since no policy change or information is given on the website, and guests still book in as either male or female. Despite this, Hostelling Scotland have confirmed by email that, “Regardless of transgendered status, we will book an accommodation based on how our guests choose to be recognised.”

This means that any male guest can choose to be recognised as a female, and be allocated a bed in a female dorm. Similarly, female guests may choose to be in a male dorm.

This is self-declaration of sex, the new law that the Scottish Government are proposing to introduce via an amendment to the Gender Recognition Act 2004. It is not yet law and, by trying to get ahead of any future changes, Hostelling Scotland is actually breaking the law as it stands at the moment. Single-sex accommodation is perfectly legal and is covered by the Equality Act, however, allowing some (but not all) members of the opposite sex into that accommodation leaves the organisation open to a legal challenge of discrimination.

In order to test how this policy would actually work in practice I decided to self-declare myself to be a man and set out to see if Inverness Hostel would recognise me as such and permit me to sleep in a male dorm. 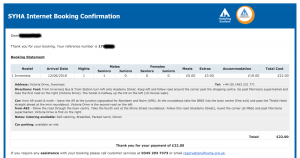 The following is a transcript of the conversation I had with the receptionist on my arrival.

Me: Hi there, [my name], I’ve got a bed booked in the males dorm for tonight please.

R: Can I ask, because em, I’ll have to move you into a female dorm if that’s okay?

R: Fine, I can do that for you. So if you can just fill this out for me, so I need your nationality, a contact number, your signature, and if you drove, the car registration.

I was then given a keycard to a male-dorm.

It was very strange; I am obviously a woman, the receptionist knew I was a woman, everyone in the queue behind me knew I was a woman. Yet no-one would state the obvious because I uttered the magic words ‘self-identify’, whereupon everyone must become blind to the evidence of their eyes and succumb to the overriding importance of subjective feelings over the reality of sex.

In the dorm I met Fred, who was also a little confused but keen not to offend me or make a fuss, and we soon got talking about cycling and the weather. He did leave the dorm soon after though and I didn’t see him again for the rest of my stay.

The dorm had 3 bunk beds with toilets and showers in separate rooms across the corridor. The door to the shower room could not be locked and the cubicles only had a curtain for privacy. 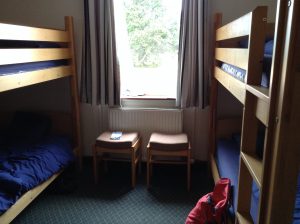 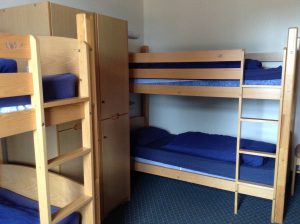 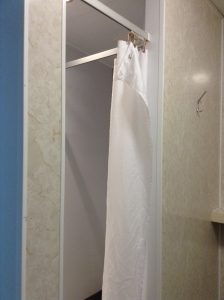 The implications of this are enormous. If the situation is the same for men who choose to be recognised as women, Hostelling Scotland’s policy gives any male, for the price of £22, easy access to five sleeping women and numerous others showering. (Online booking requires only a name, email and payment card details – it is possible to pay cash at the desk and be untraceable).

And unless every woman guest has researched the organisation to the extent I did, they are completely unaware. Women, quite reasonably, think they are undressing, showering and sleeping in a completely female environment with no expectation that a male-bodied room-mate may walk through the door at any minute, or appear in the neighbouring bed late at night. Privacy, dignity and safety concerns have been brushed aside without even informing women, never mind asking for consent.

Hostelling Scotland have created a predator’s charter. No wonder it is not advertised on their website.

I am extremely saddened by this turn of events as Hostelling Scotland holds a special place in my heart; it has a long and respected history of being instrumental in facilitating affordable and fun adventures in some of the best locations in our beautiful country. Unfortunately, I, and many other female travellers, now have no option but to self-exclude ourselves from using hostels until this policy of self-declaration of sex is amended. It is an unacceptable risk to our safety to do otherwise.

PS. I did ask my husband if he would choose to be recognised as a woman and book a bed in a female dorm. He very sensibly declined to do so, saying he did not want to alarm or scare any women, “I could get arrested for that”. Hmm, maybe not anymore.

5 Responses to A Scottish Hostelling Experience