Why Do the Ponds Matter?

Another #ManFriday, another jolly trip to the Highgate Men’s Pond on Hampstead Heath, this time wearing a rather fetching beard hand-knitted by an anonymous Mumsnetter. This time, as well as raising awareness of the peculiarities of the City of London Corporation’s policy to allow people of either sex to use the pond that matches their self-identified gender, we were looking for signs, posters, anything really, that the City of London Corporation had put up to invite bathers to participate in their online consultation about expanding gender self-ID across their services. I’ll tell you this for free: there wasn’t so much a postcard. We helpfully corrected that situation. 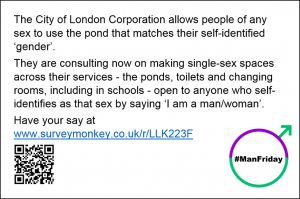 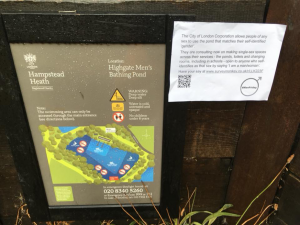 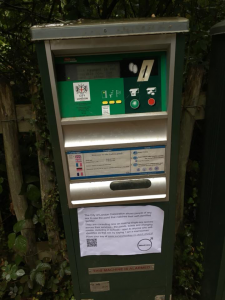 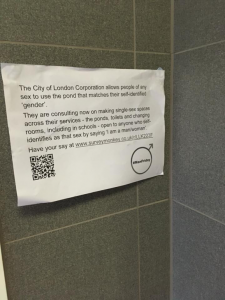 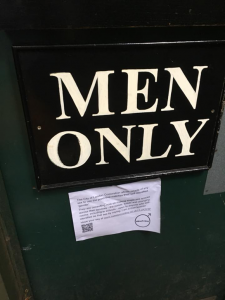 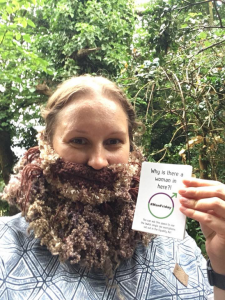 This isn’t surprising really, as the City of London corporation has been remarkably shy about publicising the consultation. So far, it hasn’t appeared on the Public Consultations page of their website and there’s been remarkably little on social media. It was first shared on Twitter by Edward Lord, a prominent mason, who is heading the consultation and who has described women who oppose gender self-ID as ‘hateful TERFs’ (trans-exclusionary radical feminists, a slur used to refer to gender-critical women) who publish ‘anti-trans bigotry’ on social media. He has publicly committed to the mantra ‘transwomen are women and transmen are men’, and states that the over-arching policy the City of London Corporation will publish following the consultation ‘aims to ensure that the services it provides do not discriminate against trans people’.

This is all lovely and woke and right-on, until, as usual, you stop to think about it. As well as the Highgate ponds (of which there are three: the men’s, the ladies’ and the mixed pond), the Corporation is also responsible for a number of public services and facilities, including several schools. The online survey, which repeatedly conflates sex and gender, asks participants to support a policy that would make single-sex spaces across their services – the ponds, toilets, changing rooms, including in schools – open to anyone who self-identifies as that sex by saying ‘I am a man/woman’.

Does the Corporation really think it’s a good idea to allow a group of teenage boys to say ‘I am a girl’ and be allowed to change for PE with the girls? Where do the girls’ privacy and dignity come in here? How about the large Jewish and Muslim communities living near the Ponds? Has anyone considered the impact on them of effectively making the ponds themselves, as well as the communal changing areas, mixed-sex?

The survey itself is deeply flawed.

#ManFriday have complained to the City of London Corporation and asked them to withdraw it, pending an Equality Impact Assessment, a re-write to remove the obvious bias and the replacement of Edward Lord as the person in charge of the forthcoming policy. On Thursday, Hannah Clarke, #ManFriday’s Media Officer, spoke at length with Marcus Roberts, the Corporation’s Head of Strategy and Performance in the Department of Community and Children’s Services. The resulting email exchanged is published below in full. The short version is: Hannah raised a number of serious concerns with the consultation, which were ignored and brushed off.

Thank you for taking the time to talk to me yesterday.  As I’m sure I made clear I am extremely concerned about the consultation that was launched this week about gender identity, due to its structure, its language and its clear lack of regard for women’s groups and wish to outline these concerns further below.  I would appreciate it if you would acknowledge this email and take steps to work towards a clearer, more reasonable consultation as a result of our input.

You stated yesterday that no equality assessment has been carried out as you don’t consider it a need or requirement.  The Local Government Association Guide to Engagement suggests otherwise – that equality assessments “must be carried out to demonstrate that decision makers are fully aware of the impact changes may have on stakeholders”.  It is worrying that this hasn’t been completed and the impact of making single sex spaces controlled by the Corporation mixed sex hasn’t been thought through.  There will be impacts on all women, but particular impact on women with certain faiths and women who have survived male violence.  That these women haven’t been considered in this consultation is distressing.

I am also concerned that the survey is being shared on social media in a very limited way.  Your chair, Edward Lord, was taken to task for some very sexist language used on Twitter recently and has blocked a number of prominent women’s rights activists.  In him sharing the survey initially (though I appreciate it has now been shared on the Corporation’s own Twitter page) this limited the audience and specifically excluded a group who work to stop single sex protections being eroded.  Beyond this there seems no effort to share the survey with people who have limited access to technology, who have poor English and who aren’t fully engaged in this political debate right now.  These people are all stakeholders who will be affected by these decisions.

The survey itself is very disappointing, I would like to highlight a number of issues that I believe you should address.

That the Corporation of London seems to be looking to undermine the protections women have, as set out in the Equality Act 2010, with this survey asking about “gender identity” is worrying.  That the language in the consultation and the distribution of said consultation is so biased is more so.

I would be grateful if you would respond to me with a suggestion of how we can work together to ensure that vulnerable groups aren’t overlooked in this consultation and that the implementation of any recommendations does not cause harm or detriment to any stakeholders.

Thank you for your e-mail, and for taking the time to contact us and set out your concerns. To respond to your main points:

We are aware that many individuals and organisations have already promoted our survey – on all sides of the debate – and already we have had a very high number of responses. While I’m sure you will be among those respondents, I will also ensure the comments you make below are recorded as part of the consultation response.

I hope this provides some reassurance, and that you will continue to engage with us as we review and develop our equalities and inclusion work.

To which she responded:

Thank you for coming back to me so quickly.

I am still concerned by your responses.

I, and all of ManFriday, do strongly suggest that the consultation be withdrawn and rewritten to ensure that it fits with national and City of London Corporation guidance.  To ensure that it addresses the issues of single sex spaces being compromised in a way that people fully understand.  To ensure that the language used is accurate and appropriate and not designed to confuse or mislead participants.

As stated above we would be glad to assist you in preparing a clear, unbiased, appropriate consultation so that the responses you receive will be beyond challenge.  It would be appropriate if the Members and Officers taking part in this consultation are equally unbiased and appropriate so I respectfully ask that Edward Lord withdraw from the exercise as his online comments have clearly shown that he is unwilling to approach this in an objective way, in accordance with your Code of Conduct.

I look forward to your response on these matters as soon as possible as the longer this inappropriate consultation is left live the more damage will be done to the reputation of the Corporation in the eyes of the wider community, particularly the 52% of them who are women.

And the final response from Roberts:

Thank you for your e-mail.

I note your comments and will ensure these are included as part of the ongoing consultation process. We would welcome your suggestions of groups we could engage in this.

All the best, Marcus

How’s that for a polite ‘We don’t care. Shut up and buzz off’?

So, why do the ponds matter? Because they enable people of both sexes to participate in swimming, which they may not otherwise do if no single-sex provision was available, and because the City of London Corporation is also responsible for schools and other services which include single-sex provisions. As usual, the most vulnerable and marginalised – children, ethnic and religious minorities, homosexuals, victims of sexual abuse, women and girls – are the ones who stand the most to lose.

The online consultation, should you wish to participate in it, is here: https://t.co/k260oUnQeG It’s open until 14th September. Until then, To the Ponds!