This #ManFriday update is three weeks of scary and awesome

We had been saving this one for a while, as we needed a date that would work for childcare, availability and not freezing our mankinis off (we’re not THAT brave!). At the end of last year, the Ladies Pond confirmed that anyone who self-identified as a woman would be able to swim there. We duly checked with the City of London authority about the situation at the Men’s Pond and were told we, as self-identifying men, would be welcome.

As you might have seen from the news coverage, this turned out not to be the case. We had men shouting at us in the changing room, we had the lifeguards asking us what we thought we were doing and after a few minutes of swimming we were escorted out by the police, who had been called because 1) some of the men were getting so irate that there were fears of a breach of the peace, and 2) one man had complained about the press taking photos in the changing room.

Happily, the men who started off by shouting at us quickly changed their tune when we explained that we agreed with them that the rules allowing us to be there were wrong and that we were there to protest against the same rules being applied at the Ladies Pond. The most vocal chap was interviewed afterwards by Sky News, after which we had a great conversation and parted with handshakes all round. Even the police, who had turned up expecting to have a fight on their hands, didn’t take long to realise that we had permission to be there, showed us the bye-laws in conflict with the decision by the City of London, posed with us for selfies and said we were the politest protestors they’d ever dealt with.

The media storm afterwards saw us back on TV, on the radio and in the headlines. #ManFriday media officer Hannah Clarke was working flat-out to keep up with the media enquiries and doing a great job of explaining how sex self-ID policies negatively impact the rights, safety, privacy and dignity of women and girls.

Strangely enough, the TRAs vociferously demanding self-ID everywhere condemned the #ManFriday protestors rather than the men who objected to our presence. Fast-forward three weeks and Women’s Place UK received a bomb threat from a TRA ‘in retaliation’ for this piece of activism. The police are investigating. As with our art exhibition, women speaking about their own rights and spaces are threatened with male violence: punches, rape, axes, baseball bats, bombs. It’s noticeable that women are condemned, whether we’re in the Ladies Pond objecting to male swimmers, or in the Men’s Pond identifying as men, while the men remain uncriticised. It’s almost as though the push for sex self-ID is led by misogynists…

Fresh from a week of exam revision, I booked a bed in a male dormitory at YHA London Thameside. As with the pond, members of #ManFriday had done their homework, checking that sex self-ID was allowed by the YHA policy and speaking to members of the customer service team, who assured us we would be welcome. And again, the situation on the ground was very different: I was refused accommodation and then subjected to sexual harassment and a sexual assault on the way home: a reminder, as if we need one, that women are vulnerable to male violence because of our sex, not feelings of ‘gender identity’. Again, the police are investigating.

Other members of #ManFriday have subsequently checked the situation at different YHA and Hostelling Scotland hostels and each visit has highlighted that their policies are an utter shambles. From being asked questions about surgery, to having no questions at all, to being placed in a private room, there is no single, consistent policy. We have made complaints to the YHA, Hostelling Scotland and the Equality and Human Rights Commission and await their response.

For a detailed account of what happened during a visit to Hostelling Scotland in Inverness, check out the dedicated blog post. Wings Over Scotland have described the situation as Hostelling Scotland creating ‘a predator’s charter’. We agree. Allowing any man to simply self-identify into a dormitory full of sleeping, undressing, women and girls is a direct threat to our safety, privacy and dignity. The YHA and Hostelling Scotland must ensure the safety of women and girls by invoking Schedule 23 of the Equality Act 2010, which allows them to restrict communal accommodation to single-sex use.

On Friday 8th June, the BFI announced that the keynote speaker for the ‘Women Behind the Camera’ summit would be none other than Munroe Bergdorf, the male transwoman, model and campaigner who was dropped by L’Oreal last year for racist tweets and this year resigned from the all-male Labour LGBT panel over his previous homophobic and sexist comments.

The BFI’s decision caused an uproar and over 1800 people signed the open letter penned by two women in the film industry, questioning the BFI’s decision to appoint a male person with no film-making experience and a history of racism, sexism and homophobia as keynote speaker at an event about promoting women in film-making.

The day before the summit, three members of #ManFriday visited the BFI offices to meet with the events team and question their stance. Afterwards, we put up posters, chalked the Southbank pavement and handed out leaflets to inform interested passers-by about the situation and our concerns. 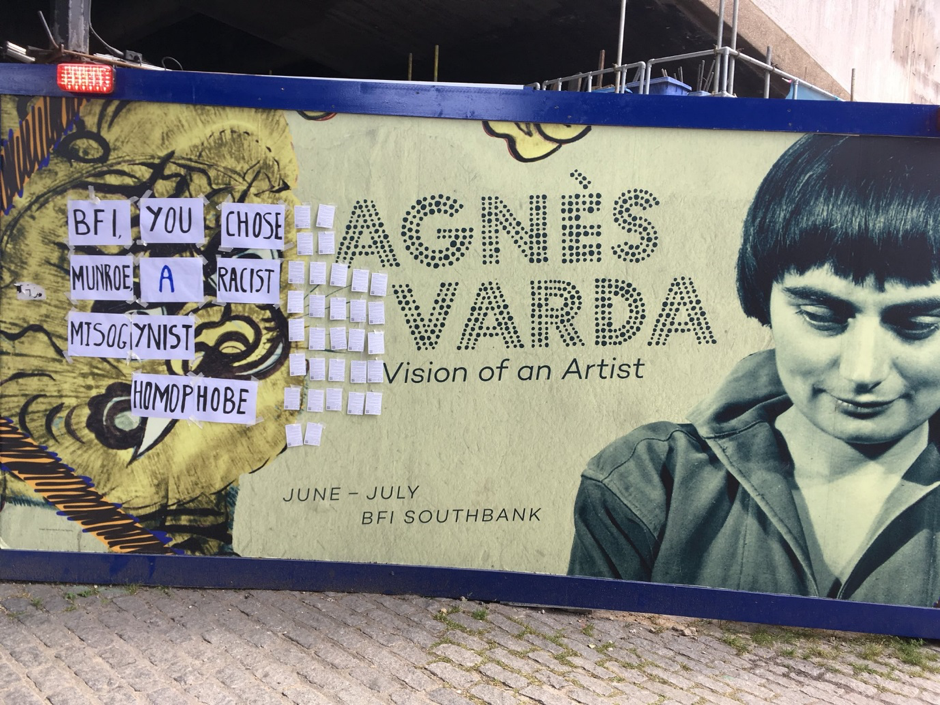 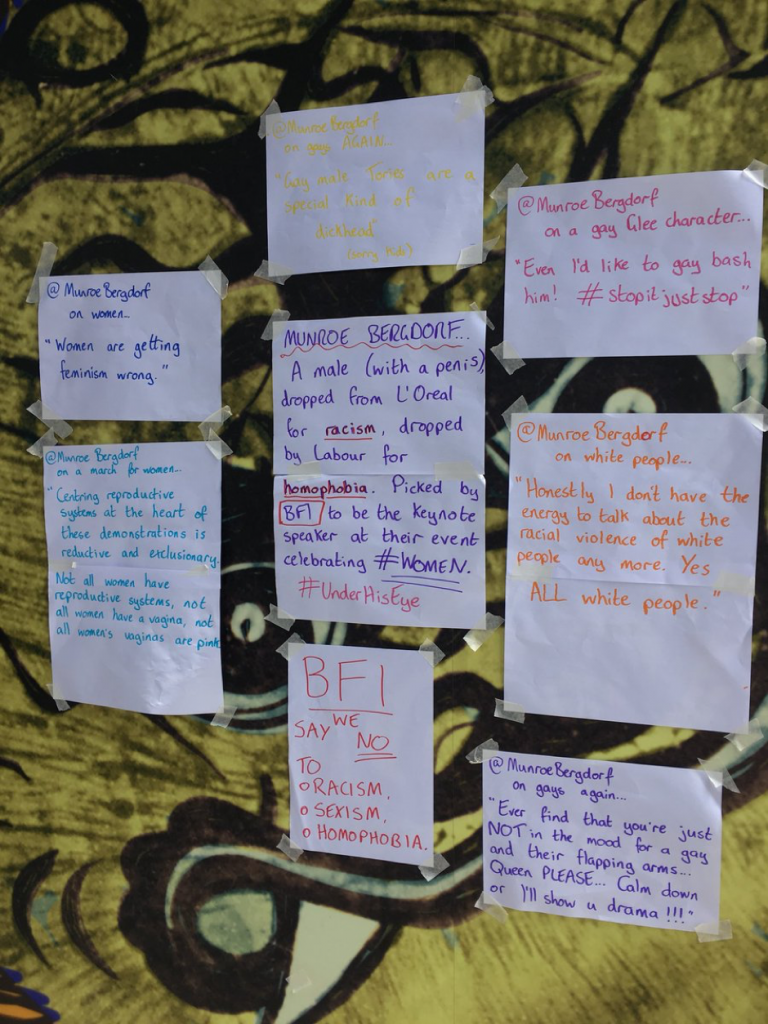 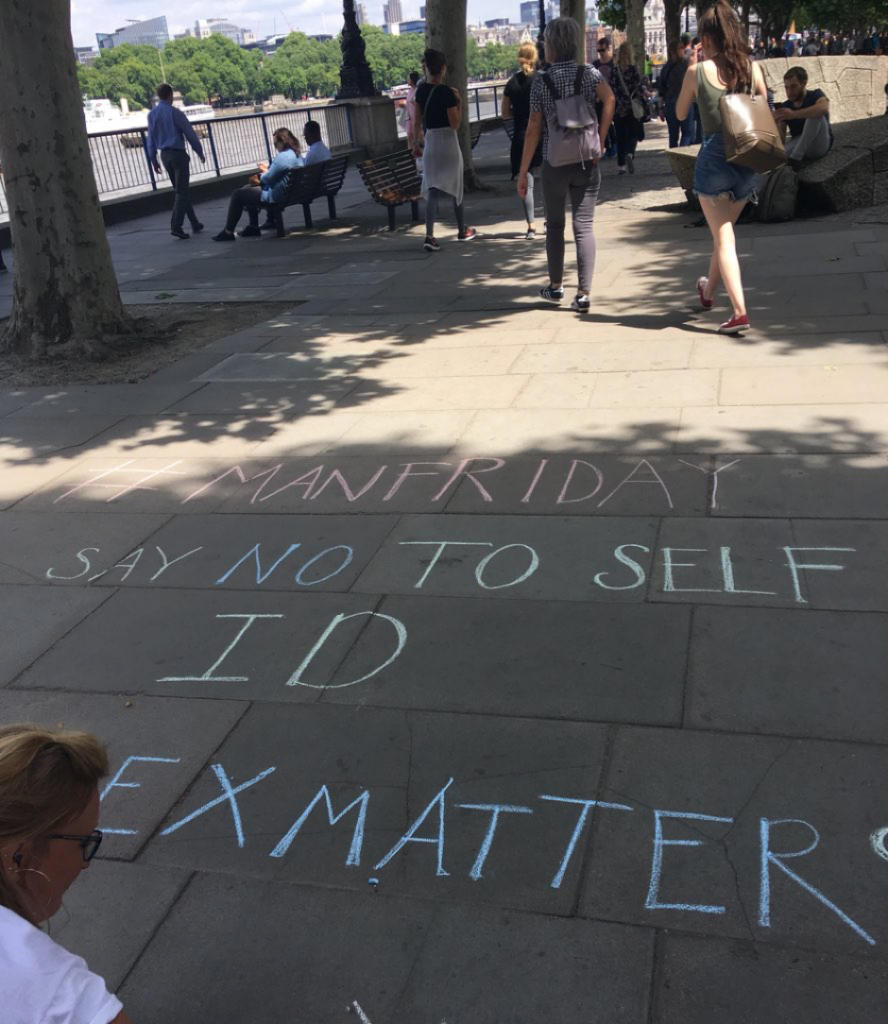 I also asked Munroe himself whether he thought his presence at the event was appropriate. 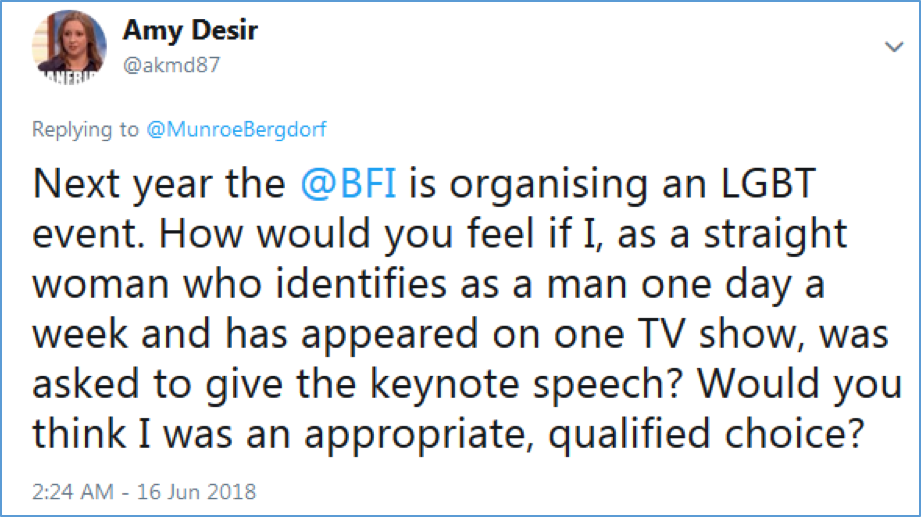 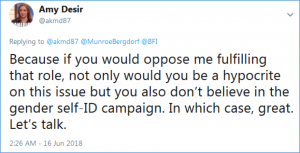 The response from the BFI was underwhelming and the only response from Bergdorf was silence and a non-appearance. We and the women who wrote the open letter have been blamed by TRAs on Twitter for ‘scaring’ Munroe away. We call this out for what it is – utter nonsense – and call on Bergdorf and the BFI to show some integrity and explain that they realised that such a speaker would not be appropriate. 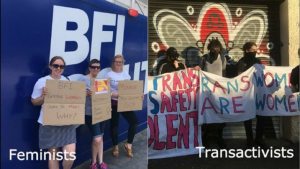 The contrast between women standing up for their own sex-based rights using cardboard signs, silly swimming outfits, letters and petitions (and a £1 xylophone), and masked TRAs blocking women from entering meetings, threatening and assaulting women shows exactly who the bullies are and who is at real risk. Clue: it’s the TRAs bullying and the women at risk.

I’m off to talk to my local police force about the bomb threat and measures to protect myself and my family. I refuse to be scared into silence on such a vital issue as sex-based discrimination against women and girls and the threat to our legal and moral rights, safety, privacy and dignity.

Every win is a vindication of women’s rights. Every #ManFriday is a demonstration of the unworkable, dangerous policies that put those rights, and women and girls at risk.