What’s Going On After 6 Weeks of #ManFriday?

On #ManFriday the 6th, we look back at the week that was.

We have now brought the issue of self-identification to the rails! The Caledonian Sleeper’s transgender policy allows male passengers who identify as women to use female-only compartments, which means that a woman who chooses to share her cabin may end up sharing it with a male passenger, albeit one who identifies as a woman.  Rupert Soames, CEO, claims that Caledonian’s travellers “were not deceitful”.  Maybe.  But which woman wants to take that chance? 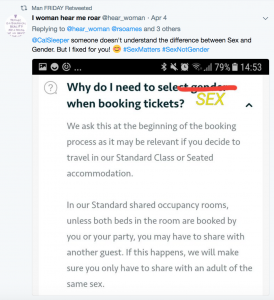 Oh, and it looks like they don’t know the difference between sex and gender.  Thank goodness that got corrected on Twitter! #SexMatters #SexNotGender

We would also urge all everyone to support the #sisterstoallguides campaign, which calls upon Girlguiding to have an open and honest discussion about their transgender policy which contradicts their safeguarding policy.  As Fair Play for Women puts it, a boy who identifies as a girl remains legally and physically male and this must be acknowledged in any risk assessment.

If you support us add your voice on Twitter using the hashtag #sisterstoallguides, add a comment on the public Sisters to All Guides Facebook page, or read and share Fair Play for Women’s Girlguiding Factsheet.

Last but not least, the Derbyshire Constabulary Choir, a male choir, have been told to accept women or lose its 60-year association with the police force.  What next? Will the King’s College Choir be told to overturn its centuries of history and tradition, and accept girls and women too? Gender equality gone mad? We think so!

This entry was posted in Activism. Bookmark the permalink.